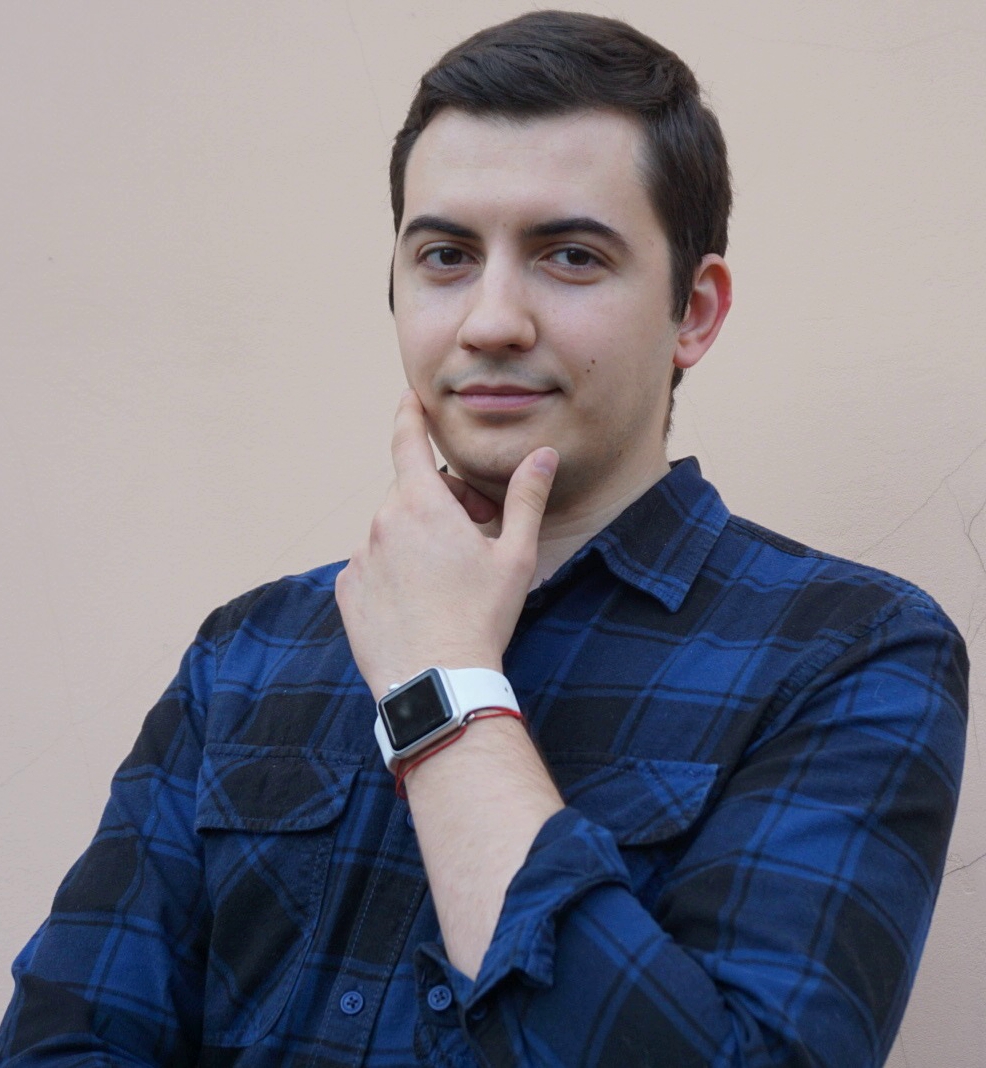 On March 23, MATEC Web of Conferences published the proceedings of the IX Charnov Readings in English. Our colleague - Denis Vannusov, Leading Engineer of the low-current systems department at Metropolis, co-authored the article "Organizational Features of Implementing Innovative CAD Systems in Existing Production Systems".


The development of civilization is always based on some specific changes embodied in the material world. The 20th century has become a time of ubiquitous computerization of production processes. Traditional methods of creating industrial products, based on manual or mechanized labor, began to give way to the primacy of the general automation of processes at enterprises in various sectors of the economy. This became possible due to the rapid development of such scientific and technical disciplines as systems analysis, mathematical and simulation modeling, automatic control theory, operation research and others. And although the active development of technologies for complex automation of production processes fell on the second half of the XX century, today the possibilities of optimization, improvement of methods and techniques for creating products continue to develop rapidly. Increasingly, the leadership of our country is voicing the need for the transition to a "digital economy". The "Strategy for the Development of the Information Society of the Russian Federation for 2017-2030", approved in Russia, provides the following definition of the digital economy: "The digital economy is an economic activity in which the key factor of production is digital data, the processing of large volumes and the use of analysis results of which, compared with traditional forms of management, can significantly increase the efficiency of various types of production, technologies, equipment, storage, sale, delivery of goods and services". Obviously, this interpretation contains a number of value judgments, including 'traditional forms of business ...' or 'significantly increase efficiency ...', nevertheless, in IT there is a well-established term "Big datа".


With regard to systems of human-machine interaction (hereinafter HMI), the concept of "efficiency" is also regulated. Human-machine (or human-computer) interaction is a multidisciplinary scientific direction that exists and develops in order to improve methods for design, assessment and implementation of interactive computer systems intended for human use, as well as for the purpose of researching various aspects of this use. Based on this definition, we conclude that HMI is inextricably linked with the peculiarities of the functioning of computer systems, which include, for example, automated systems. An automated system is a system consisting of personnel and a set of means for automating their activities, which implements information technology for performing established functions. The effectiveness of automated systems (hereinafter referred to as AS) is regulated by GOST 34.003-90 and means a property of the AS, characterized by the degree of achievement of the goals set during its creation. To assess the degree of achievement of goals, the customer generates performance indicators, on the basis of which the assessment is made. There can be one or several such indicators. Among them: a decrease in the probability of errors, an increase in the speed of production, an increase in the quality of a finished product, etc. It is obvious that all these indicators, to one degree or another, affect the financial and economic component of production and are the object of direct interest from the management of the enterprise.


There is a conditional classification of AS by type of activity:

All the listed classifications of the AU, to one degree or another, are introduced into the production mechanisms of the world and domestic economies and are independent objects of analysis and development. However, if we take into account the principles of PMI, then of course, it is CAD that plays a key role here.


CAD is an organizational and technical system that is part of the structure of a design organization and carries out design using a set of computer-aided design tools. In most countries of the world for such AS, the abbreviation CAD (Computer Aided Design) is used.


The most popular one today is Autodesk AutoCAD, which has won the trust of designers around the world, and our country is no exception. Nevertheless, the trend towards the transition to the use of information modeling gives rise to the need to introduce the latest CAD systems into the existing production process, allowing the successful implementation of such modeling. The implementation process is one of the five phases of the AS life cycle (Figure 1). In this case, each phase corresponds to a specific state of the system, predetermined by the life of the AU and the goals facing the customer and developer. 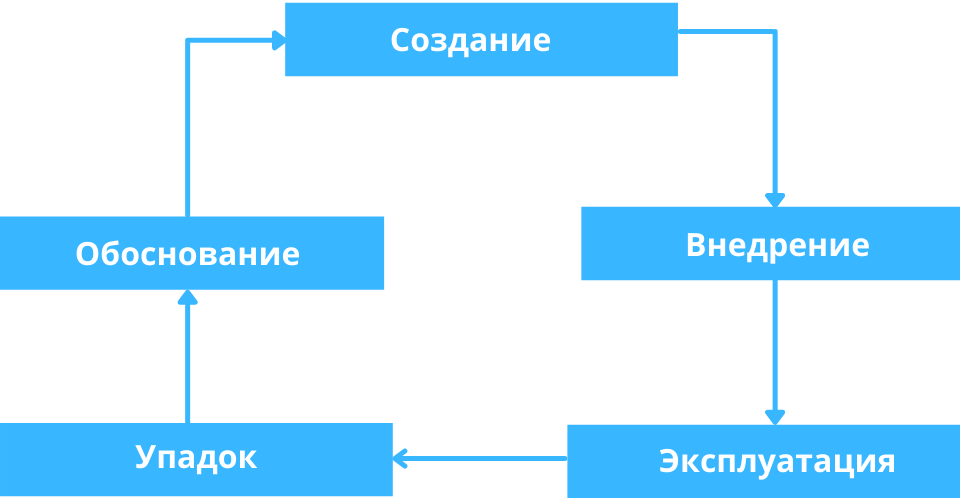 Figure 1. Life cycle of AS.

Obviously, in the case of already existing CAD systems, the phases "justify" and "create" lose their relevance. The “decline” phase is not considered in this way, since at this stage we are considering only those systems that will improve the efficiency of the production process, under the conditions of the given efficiency parameters (the most innovative AS). In fact, human (operator) and CAD interaction begins to occur at the "implementation" and "operation" stages. It should be noted that in practice these two phases can be combined. In this case, the operator begins to work on the production tasks assigned to him, while already using the implemented CAD system. Phase alignment is designed to speed up the production process without wasting time on thorough preparation of the system for operation. It is in such cases that the greatest number of difficulties and collisions arise in the HMI environment.


The introduction of new CAD systems into the existing production practice, in fact, is an aspect of innovation at this enterprise. It is known that there are four groups of factors that impede innovation:


Speaking about the implementation of innovative CAD systems in design organizations, it is worth mentioning the experience of the Metropolis company, in which the transition from traditional 2D-design to the most advanced intelligent 3D design tools - BIM (Building Information Modeling) - was successfully carried out. The company was founded in 2005 and has been using various BIM modeling tools almost since its beginning. Since 2015, Autodesk Revit has become the main design platform.


In essence, BIM modeling is a process based on the use of intelligent 3D models. The transition from two-dimensional design to three-dimensional design solves a number of typical difficulties arising in the process of developing technical documentation for a particular object (building, structure). We are talking about the possibility of a much more effective coordination of various engineering communications with each other (Figure 2), the ability to consider the object as a whole, as an information model. In addition, BIM modeling allows you to set certain typical properties for drawing elements and project them onto the entire object model at a time. Also, information modeling of objects allows you to more efficiently manage the changes being made. 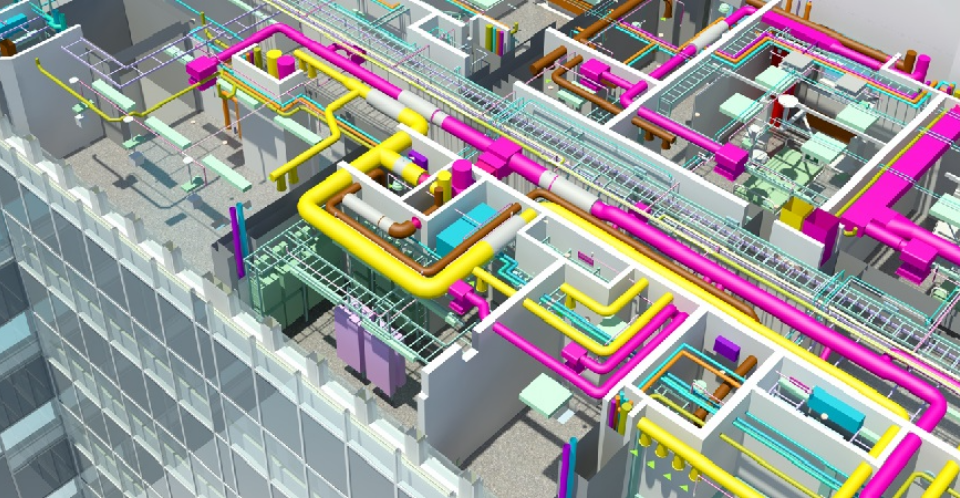 Figure 2. 3D-model of coordination of engineering communications in the Autodesk Revit environment

However, in addition to the obvious benefits of switching to BIM modeling, there are a number of negative factors that are also worth mentioning:

According to Oleg Baranov, Deputy General Director of Metropolis, the cost of switching to BIM technologies was about 20 million rubles, and the transition process took about one year. The volume of investments in this case depends on many factors, including the number of employees, the age of the organization, etc. In the process of implementation, the method of so-called pilot projects was used. This means that some of the projects are developed using new CAD systems, and the other part - using traditional methods. This approach makes the transition to BIM technologies less painful. Employee training is a key aspect of implementation processes. At the Metropolis company, specialized courses were organized for employees, where they have the opportunity to learn new software, perform practical tasks under the guidance of an instructor. In addition, the training program for employees of different structural divisions is formed taking into account the peculiarities of work in each particular division. Thus, the employee receives knowledge that will be useful personally for his work. At the same time, a training block is organized on the corporate portal of the company, with which an employee can work independently, if necessary, seeking advice from the department responsible for the implementation of CAD and training of employees. Next, we will present the general structure of the organization of the implementation of innovative CAD systems in design organizations, using the example of the implementation of BIM technologies in the Metropolis company (Figure 3). 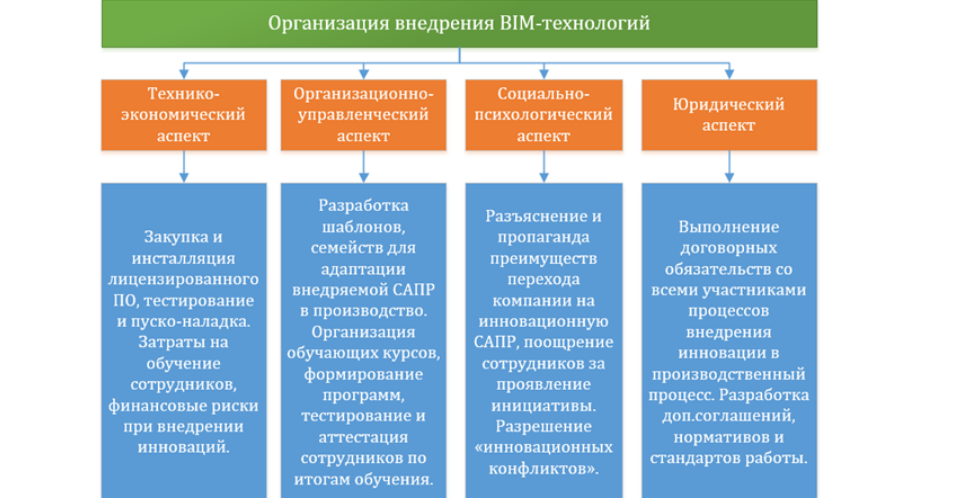 The progress of carrying out the organizational measures for the integration of innovations is constantly subject to analysis and control. If necessary, the list and content of such events is supplemented and corrections are made.


The effective organization of the implementation of innovative CAD systems in existing production cannot be considered separately from the applied aspects of adaptation of the company's employees to the proposed innovations. In order to successfully avoid possible negative trends in the implementation of CAD, it is necessary to have a comprehensive understanding of the features of the interaction between the employee and the hardware and software with which the production of the final product is carried out. In this regard, it is reasonable to resort to the development of a generalized informational model of the PMI, in the conditions of finding an innovative CAD system at the stages of "implementation" and "operation" (Figure 4). In this case, it would be reasonable to combine these two stages into a kind of an intermediate stage, during which the adaptation of the employee to the innovative CAD system and the release of the final product take place in parallel. One of the most convenient ways of presenting an information model is a triadic infographic model based on the interaction of three objects (monads) - man, technology and environment (hereinafter MTE). As objects, we take a CAD operator, a workstation with installed innovative software and an environment in which the work process is carried out. We represent the information model in the form of a three-point cycle with multidirectional impact (Figure 4). 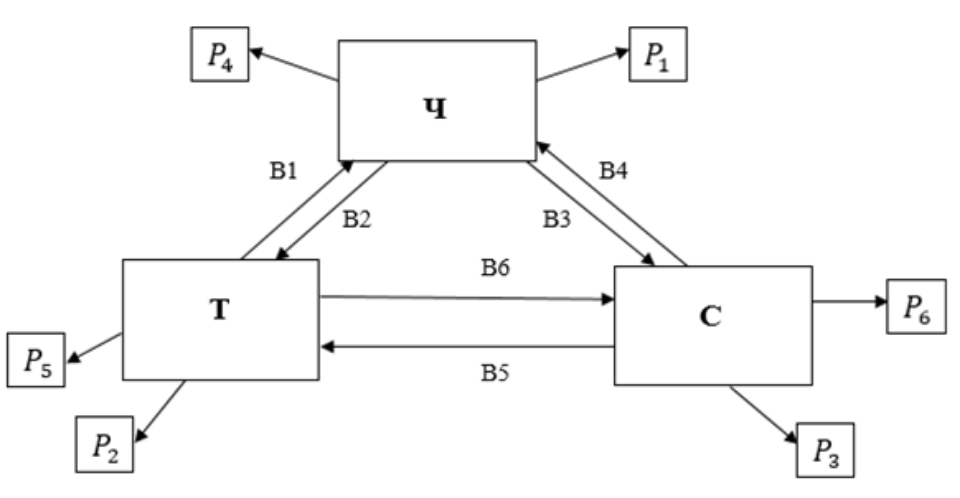 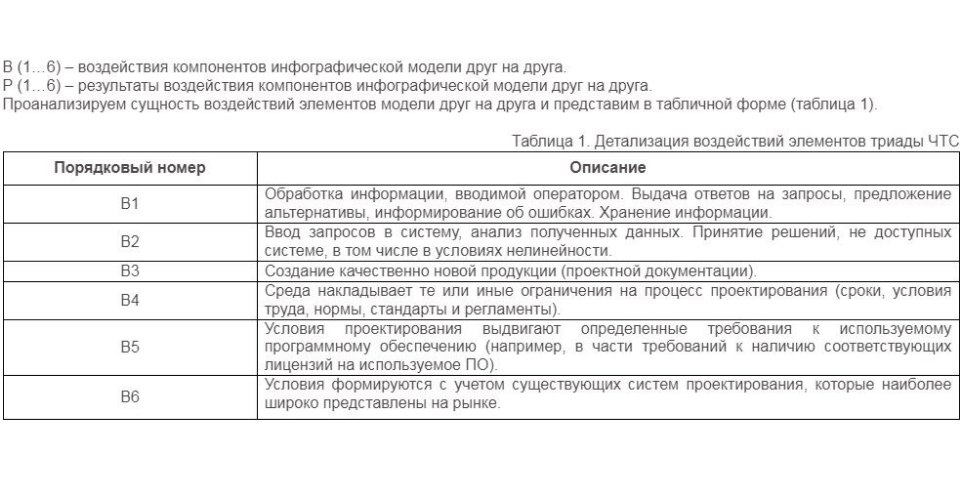 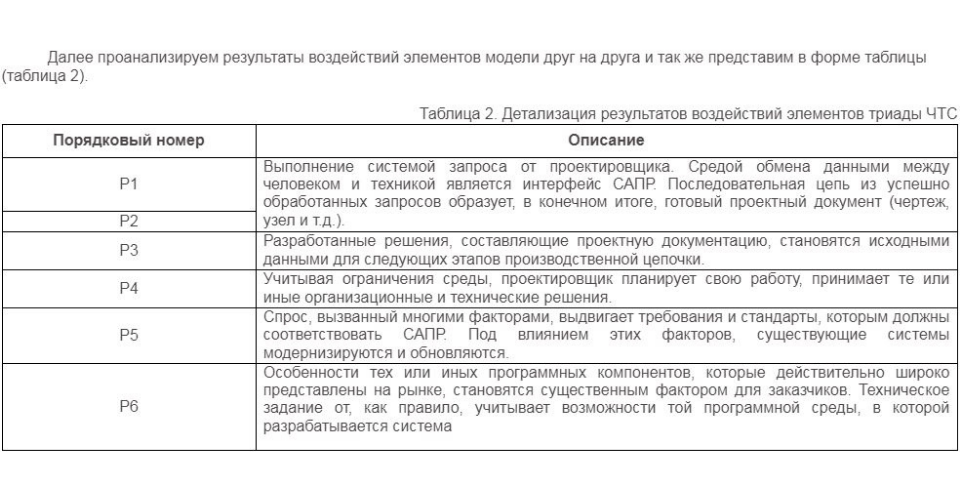 The system analysis technique used can be considered in more detail. Thus, the number of processes occurring during the interaction between an employee and CAD can be significantly increased. However, according to the results of the study, even within the framework of a given scalability, we can draw some conclusions:


Understanding the nature of the interactions between the designer and CAD is an essential element in the development of effective organizational and management decisions, when introducing innovative technologies in design into production. It is necessary to take into account all the most significant aspects of implementation, including non-deterministic events or the "human factor". Comprehensive, systematic work in this direction will make it possible to implement the transition to a more advanced, innovative CAD system much more efficiently.


Read the article on the website MATEC Web of Conferences.

The growth of cities upwards is a necessary measure