This year, an indoor skating rink at the Sports Complex of the Olympic Village-80 appeared on the sports map of Moscow. The main sections of the project, including architecture, structures and internal engineering systems, were completed by Metropolis using its own designers.


Olga Galanina, Chief Project Architect of Metropolis, and Fedor Isaev, Chief Project Structural Engineer of Metrtoplis, shared the story of designing an ice rink for the thematic December issue of Sport Build (No. 9, December 2019) about ice, sports and business on ice.

The indoor ice rink in the Olympic Village is a single volume with dimensions of 52 × 80 m and a height of 16.5 m. The 12 m high ice rink hall accommodates a large ice field 61 × 30 m, training ice rinks and stands for 284 seats. The rest of the building is L-shaped adjacent to the volume of the skating rink on two sides (the so-called administrative building, hereinafter ABK) and divided into 3 above-ground floors. On the 1st floor of the administrative building there are locker rooms, wardrobes, premises of the reception and vestibule group. On the 2nd floor there is a training room with a group of locker rooms, a buffet and technical rooms. On the 3rd floor there is a gym with a group of locker rooms, rooms for staff and administration, technical rooms. The technical rooms are located in the basement. 108 people can train in the building at a time.

The frame of the ice arena was made using steel structures: columns and trusses with a span of 35 m, and the construction of the administrative building - in monolithic reinforced concrete. The cooling center was located in the basement, and the coolers themselves were located on the roof of the ABK. When selecting dry cooler equipment, noise parameters were calculated, since there is a residential area nearby.

Fire protection of metal structures was carried out with a paint intumescent coating in order to increase the fire resistance limit up to 120 minutes. When assigning the profiles of structures and shaped elements, it was taken into account that the reduced thickness of the metal was at least 5.8 mm in accordance with the requirements of fire safety standards. The roof of the skating rink hall was designed from element-by-element sandwich panels with the required fire resistance limit of at least 30 minutes. The roof covering is made of PVC membrane.

The decoration of the outer walls of the building is designed in the system of a ventilated facade, with finishing with large-format aluminum panels. The cutting of panels has a pronounced vertical linear pattern, which is supported by narrow stained-glass inserts along the entire height of the facade from the parapet to the plinth. The main facade of the building, oriented towards the main flow of visitors from the side of the sports complex, is designed in the form of a polygonal plane with a uniform alternation of protruding teeth, and also has a more complex decorative finish. The jagged protruding elements on one side are decorated with lamellas that create a graphic monochrome pattern reminiscent of the trails of a skate on ice, and on the other side are filled with perforated panels with sports-themed graphics. The panels of this façade are attached to a remote steel substructure, which, in turn, is attached to the racks of the ice arena frame. On the façades of the building, viewed from the side of the street (prospect of the Olympic Village), decorative metal silhouettes of hockey players are installed with a separation from the plane of the façade and decorative lighting. This solution adds attractiveness to the appearance of the building at night. The monochrome solution of the facades (the white color of the facade in contrast with the dark plinth, stained-glass windows and windows, perforation pattern) is designed in the same color scheme as the main building of the complex and is in tune with the functional purpose of the ice rink. 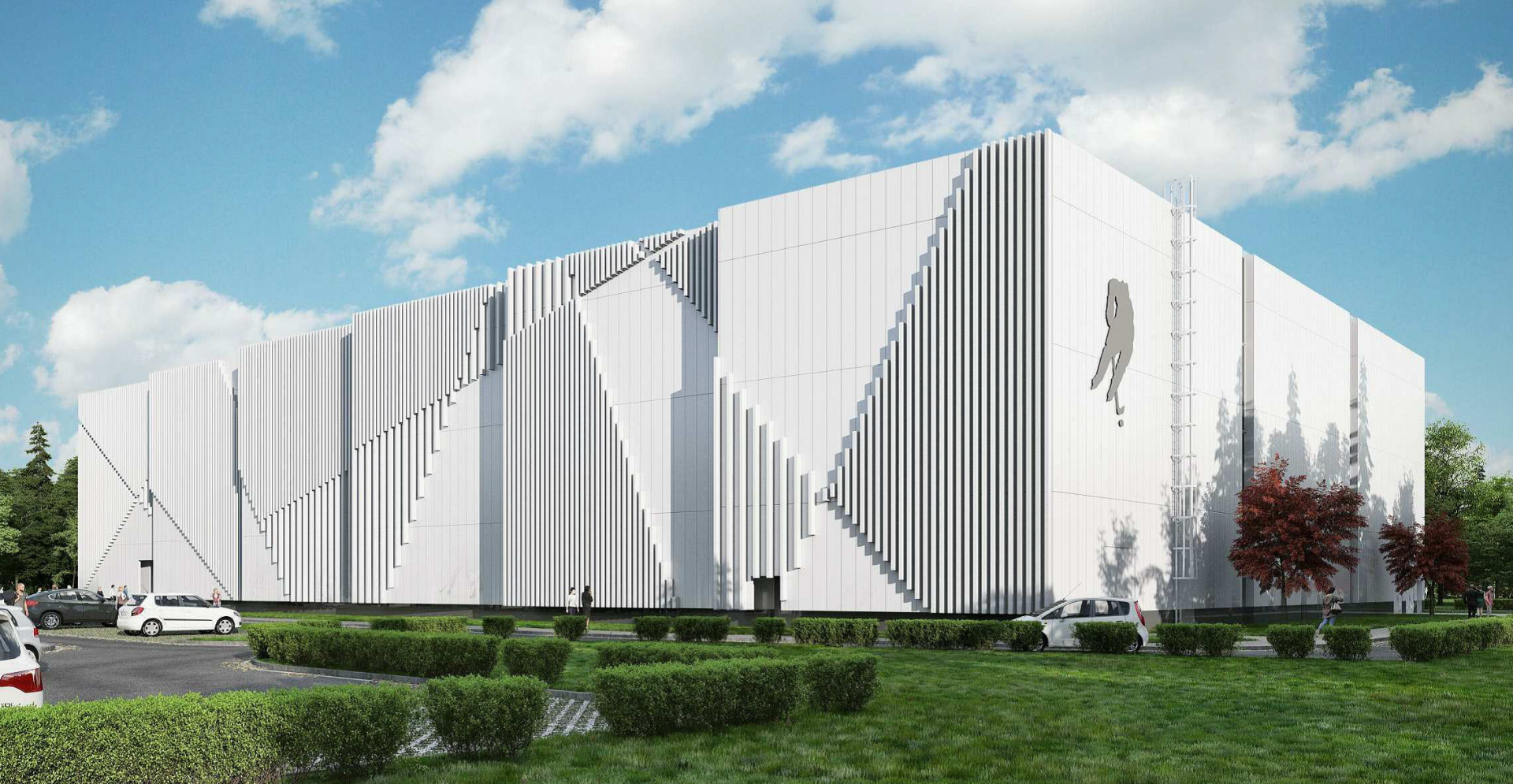 The construction budget did not include the cost of individual solutions in the interiors. But the authors did not leave the desire to give the interiors recognizability, brightness, similar to its outside appearance, and convey the atmosphere of a sports festival. It was decided to make a kind of graffiti in the interiors, echoing the pattern of the main façade, but with the use of color. A simple, but quite active and memorable color palette was chosen, where bright yellow became the dominant color. On its basis, simple in execution, but dynamic graphic schemes for the main spaces of the building were developed. Graphics decorated the hall of the ice rink, the foyer and the stairs. The same colors were used in the selection of tiles for showers and bathrooms for athletes. The author of the interior concept is Ekaterina Rubtsova. It should be noted that the builders fully supported us in this matter and carried out the work according to the proposed sketches very efficiently and thoughtfully.

Since the financing of the object was carried out from the city budget, it was important to develop a real estimate for passing the state examination already at the “Project” stage. In just four months, the company's specialists developed a project based on a BIM model, in which, along with a deep study of architecture and structures, communications wiring and equipment placement were completed and coordinated. Thus, the "Project" stage was completed according to the requirements of LOD 300 for BIM modeling. Moreover, the solutions laid down at the “Project” stage were implemented almost without changes at the “Detailed Design” stage. This approach is costly at the Design stage, but at the same time it saves a lot on Detailed Design, which ultimately turns out to be more cost-effective for the company as a whole. Thus, the section “Structural and space-planning solutions” did not require a second examination. As a result, the indoor ice skating rink became a finalist in the second BIM Technologies 2017 competition, which was supported by the Russian Ministry of Construction. 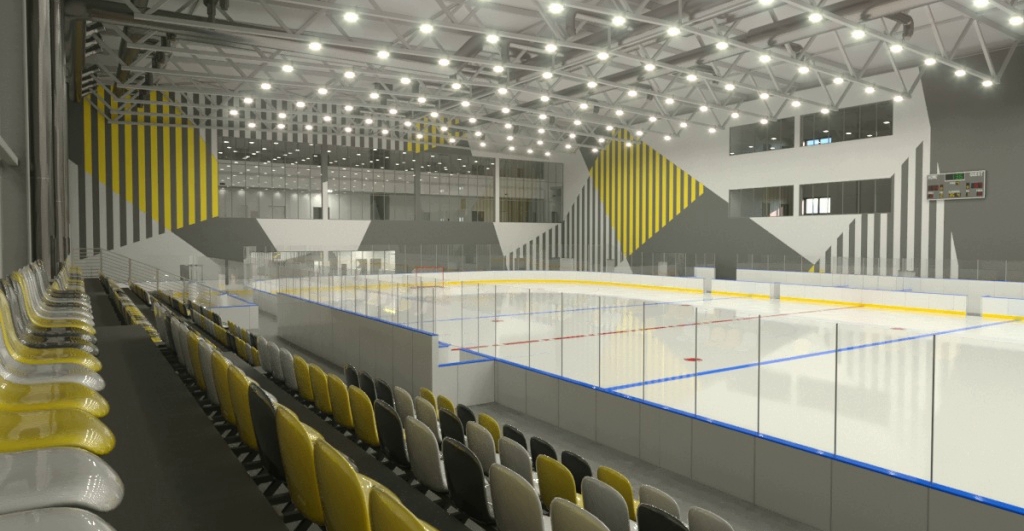 The material of the article was published in the magazine Sport Build (No. 9, December 2019) and the channel "SportAcademAd" in Zen.Yandex.

Background of land plots: how to understand that residential complexes are being built on "clean" land?

Green-development is a tool for capitalization